The Science Behind 4K Optics from Canon Pro on Vimeo.

The EOS C700 offers the option of two different sensor designs. The EOS C700 offers a 4.5K CMOS sensor with 15 stops of dynamic range. The standard sensor will be offered in both PL and EF mounts. The EF mount version of the camera features Dual Pixel CMOS AF Technology.

The image on a global shutter sensor is captured simultaneously by every pixel on the sensor. Standard CMOS sensors capture the image by scanning the scene from top to bottom. Depending on the speed of the scan, the time delay between the scan of the first line and the last sometimes results in a "jello" effect where straight lines appear curved or wobble as the camera or subject moves. By capturing the entire image at once these artifacts are removed. The EOS C700 GS PL features 14 stops of dynamic range and does not offer Dual Pixel CMOS AF.

The EOS C700 features a new design when compared to previous Cinema EOS products. The EOS C700 is a full size cinema camera allowing for both traditional studio style and handheld configurations.

The camera body includes built in cheese plates with numerous 3/8-16 and 1/4-20 threaded holes on the top and bottom to easily attach accessories. The top handle attaches in a variety of positions for assisting in achieving optimum balance.

Both sides of the camera can have redundant main displays with menus and controls. A built in control panel on the camera operator side allows quick access to the camera controls. Canon's optional new Remote Operation Unit OU-700 attaches to the camera's right side and mimics all the functions of the built-in Main Display. It conveniently flips up for access to the CFast and SD card slots. This allows for camera operation from both sides of the camera making camera adjustment easy for both operator and assistant.

The intuitive six button layout of the menu system allows quick access to frequently used camera functions such as ISO, shutter, slow and fast motion, etc. and may instantly feel very familiar and comfortable to camera operators. Within each quick access function is the ability to access deeper menu options so complete camera control and customization is always accessible while the menu remains clean and easily usable. 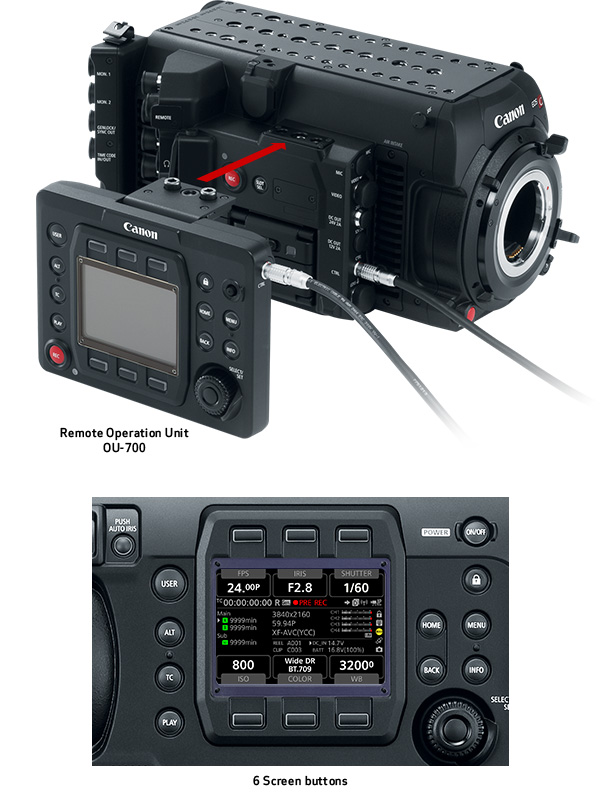 The Codex CDX-36150 is made specifically for the EOS C700 and attaches to the rear of the camera and is controlled directly through the cameras menu system.

Codex CDX-36150 is an integrated system when attached to the EOS C700. The Codex Recorder allows recording not only 4K RAW, but also ProRes at significantly higher frame rates than internal CFast Cards. When recording RAW files are saved as a .RMF frame sequence in an uncompressed format with no "baked in setting." Clip development can then be easily adjusted in post using the included Canon Raw Development (CRD) software. 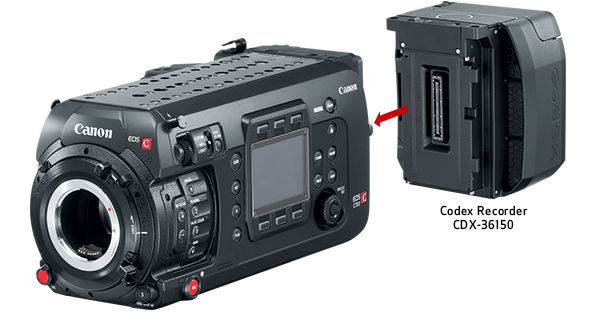 The EOS C700 has two modes of internal recording: Canon XF-AVC and Apple ProRes. Both record to internal CFast Media.

The camera also records Apple ProRes to CFast media. This is the first time a Canon Cinema EOS camera records ProRes internally. This can help significantly reduce the time and cost of transcoding video files for productions using ProRes as an intermediate and delivery format.

The EOS C700 features two CFast 2.0 card slots on the camera right side and one SD card slot. The EOS C700 can record XF-AVC and ProRes (along with metadata) simultaneously to either or both CFast cards.

Simultaneous recording is helpful, for example, where one card might go to the post house and the other could be stored safely in the production company's archive.

Relay recording is also possible for situations where changing cards and losing precious seconds is not an option (sporting events, speeches, nature documentaries). At the same time, an 8-bit 4:2:0 Proxy XF-AVC file can be recorded to the SD card for immediate editing. The SD card can also capture JPEG still frames (2048x1080 or 1920x1080), metadata, menus and other information. 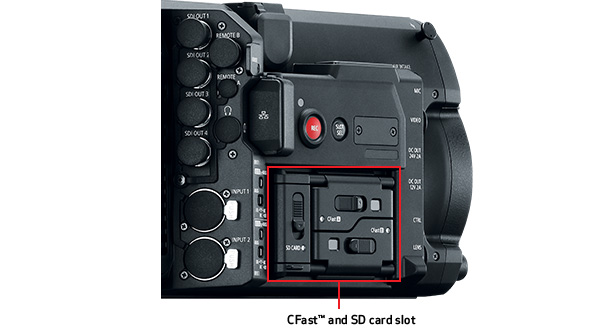 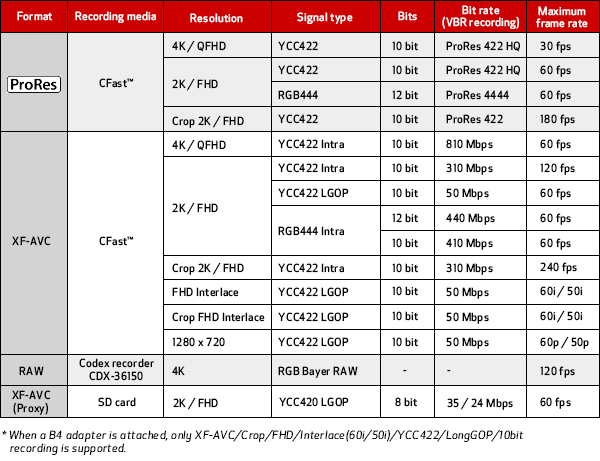 While Canon Log 2 provides the most post-production flexibility and the full 15 stops of dynamic range of the sensor, it requires more post time. For users looking for most of the benefits of log workflow, but with shorter turnaround times, Canon Log 3 provides an alternative with only a slightly reduced dynamic range of 14 stops.

The EOS C700 features the option to output ST 2084 over the monitor port to assist in HDR production. ST 2084 allows compatible monitors to simulate the HDR look of the final piece allowing for easier lighting and other technical decisions on set during the acquisition process.

The optional Canon Electronic Viewfinder (EVF-V70) also allows for a ST 2084 simulation mode to allow the camera operator to see HDR visuals close to what is supplied on the monitor signal. This can further facilitate creative decisions on set where HDR reference equipment and output devices might not be available.

The EOS C700 Digital Cinema Camera features next generation Dual Pixel CMOS AF (DAF) Technology. Each pixel in the camera's CMOS sensor is configured with two photodiodes. Two independent image signals can then be detected at each photosite. By implementing phase-difference AF, smooth focusing is accomplished using Canon EF lenses with much higher speed and accuracy than was possible with previous technologies.

The EOS C700 has rapid one-touch AF (with a push-button) and continuous AF within approximately 80% of the overall image area. Face detection AF is another autofocus mode that can track a person's face in the frame and maintain focus on them.

To further fine tune AF performance, the EOS C700 offers the ability to set the AF tracking speed and response.